“Dry-celling” is a form of solitary confinement where someone suspected of carrying contraband is held under direct observation, with the lights at all time, and with no running water for an indefinite period of time. Lisa Adams, who had been held in a dry cell for 16 days while incarcerated at the Nova Institution, challenged the law that gave prison management the authority to hold her in a “dry cell” for an indefinite period of time using sections 7, 12, and 15 of the Charter.  The Elizabeth Fry Society of Mainland Nova Scotia worked closely with Ms. Adams, along with the BC Civil Liberties Association and CAEFS, to provide support and to bring public attention to the cruel and inhumane practice of dry-celling.

In November 2021, a Nova Scotia supreme court judge struck down the law that permits the use of dry celling, finding that it breaches section 15 of the Charter. Judge Keith gave the Federal Government 6 months to change the law to bring it in line with the Charter.

In April 2022, As part of the 2022 Federal Budget, the government proposed the introductions of amendments to the Corrections and Conditional Release Act (Act) that will prohibit the Correctional Service of Canada from placing people in prison, who are suspected of concealing contraband in the vaginal cavity, in dry cells. A measure that, they say, will bring the Act into compliance with the Canadian Charter of Rights and Freedoms.

CAEFS continues to advocate for the elimination of dry-celling and all forms of solitary confinement. 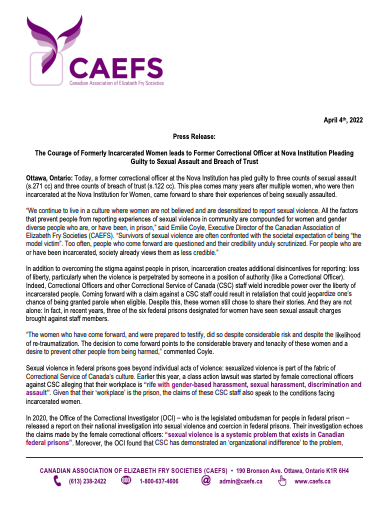 Today, a former correctional officer at the Nova Institution has pled guilty to three counts of sexual assault (s.271 cc) and three counts of breach of trust (s.122 cc). This […]

This summer, we are piloting regular social media features aimed at keep us connected with you, while cultivating curiosity, knowledge sharing, and action. Below, you will find a summary of […]